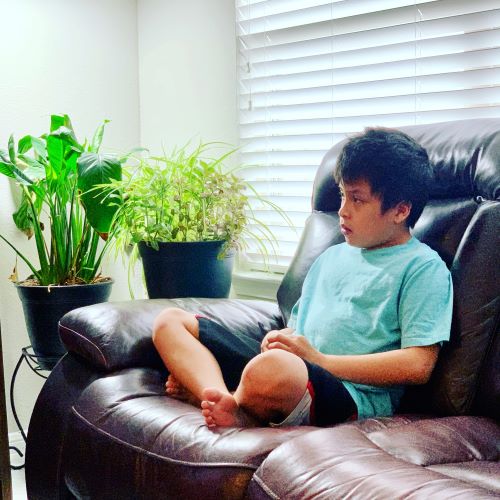 Most of 2020, Aiden stayed in his underwear in the house. He would be very quick to get completely and appropriately dressed at the hint of going outside. But as soon as he comes home and barely a few steps from the door, he starts leaving a trail of clothes. Shoes, socks, shirts, shorts/pants. Thank goodness he at least kept his underwear.

As parents, it bothered us. Were we regressing? Is this how it’s always going to be? He’s getting bigger and older. He can’t be just in his underwear in the house forever! The thought of it was frankly, scary. When I look at Aiden and his progress, I always try to imagine what it would be like 10 years ahead. And then, how will he be and what will become of him when he becomes an adult… when I am gone. So as he parades around the house in his undies, I am thinking to myself – Oh my! A 20 year old parading around the house in his undies would be inappropriate.

I have the tendency to want to address less-than-desirable situations immediately. Naturally, it was very tempting to go on my fix-it-mode. It doesn’t help that sometimes the world we live in makes parents like us question our actions and their repercussions all the time. If I don’t fix it, what if someone comes along and decides that this was one thing that defined me as a parent. What if none of the things I have ever done for my child matters? What if this was what made me an incapable parent? Speaking for myself, these thoughts tend to amplify because Aiden is in the spectrum. I have observed that there’s plenty of people who seem to deem themselves the expert in raising my child more than me.

Raising Aiden, I have learned that it is always best to give him time. He will do things when he is ready. Forcing him to conform to what I want is the least successful approach. And in truth, adaptive behavior takes time to learn. And while Aiden has learned and practiced grooming appropriate for his age, it wouldn’t be uncommon for a child like him to regress. Not ideal, but not uncommon.

Like always, I took a step back. Has anything changed? If this is regression, something in his environment (which would primarily be our home) has changed.

So what changed? ME! I happened! Because of COVID restrictions, I have been home since April. Normally, I am at work Monday through Friday. I am no longer home when he wakes up and I don’t come home until early evening. Could it have been me? Could I have been the disruption in the routine that caused the undressing spree? Maybe. Or, maybe not.

In the absence of knowing why and too many maybe’s, I tuned out the scary thoughts. I know my child. He goes through phases. This is a phase. One that he entered on his own and will leave on his own. I have to allow him time and let him be. But because this isn’t an ideal behavior, I cannot completely let go. I have to walk this phase beside him with enough space between us. If that makes sense.

I stopped nagging and ordering. Instead of saying “Put on your clothes”, I started bringing him just a T-shirt and putting it on him and telling him gently, “T-shirt please. We need to put on a T-shirt so we do not get sick” and then I put it on him. He’ll cooperate and I thank him and walk away. He’ll take the shirt off shortly thereafter. I use the “sick” spiel because it is important to explain the reason he has to keep his clothes on. Getting sick is something he knows, something he can relate to. When he understands why, we gain better chances at compliance.

I let him be and and gave him a few hours. Then, I would come back to see him with a shirt on my hand and repeat the same spiel. Gently and kindly each time. When he walked in the living room with his T-shirt on, I gave him praises. “Good job wearing a shirt!” “Thank you for wearing your shirt.” Each time with a smile.

And then one morning, I just saw him with his bottom pajama on! I couldn’t hide my excitement. He got hugs, kisses, and kudos. “Great job Aiden! Great job keeping pants on! WOW!” He smiled faintly and walked away. My heart was joyful. We are in the same phase but we’re keeping up pace.

And what do you have it! Now…. for almost a month – he has been keeping his shirt and his sweat pants/shorts/pajamas on 24/7! Letting him be but not letting go worked. He really has taught me to be a better person, and he continues to teach me how to be a better parent.

If you have the same scary thoughts I do or are wondering if what you’re dealing with will end – just know that all you can do is the best that you can. With unconditional love in your heart for the child you are caring for, with grace for the mistakes you are going to make, and trust in your child’s abilities – there is bound to be progress. I know in the most overwhelming days “It gets better” means absolutely nothing but, it really does get better. Don’t let go.

Saturday afternoon hike at #lostmaplesstatepark
Play-doh … I don’t like them but my kids do! ☺️
We are back and in 3rd grade! 😊
#guadaluperiver #beautifulspot #localspot #texasliving